During an announcement made at the Carbon 2016 conference held at Penn State, Mike Murray, Chief Technology Officer at Morgan Advanced Materials, revealed that the new Center of Excellence would be located in Innovation Park at Penn State, placing it in close proximity to the university’s top talent and facilities. Over the course of three years, Morgan is expected to make a multi-million pound investment aimed at establishing a truly world-class research facility. Once operational, the center is expected to continue to create a range of highly-skilled research posts over the next few years. 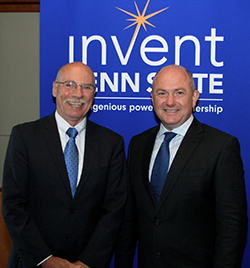 The partnership with Penn State will combine resources and experience from both sides, creating a synergy that will enable significant progress in the development of carbon materials for a range of sectors and applications. The Center of Excellence, which will be the third of its kind for Morgan globally and the first in North America, will play a vital role in the further development of Morgan’s core competencies in the areas of materials and application engineering. Over the longer term, the findings generated by the center will support Morgan in its mission to deliver world class materials science solutions that meet the engineering challenges of customers worldwide, safely and efficiently.

Mike Murray explained: “For us, the decision to work with Penn State was a natural one. As a world leader in carbon-related research, Penn State has an unrivalled reputation for innovation in its field, which we believe will add real value for our customers. The partnership will help accelerate our development of new products and capabilities, enabling us to continue to meet the future needs of our customers more quickly, efficiently and comprehensively.”

Pennsylvania was seen as the ideal location for the new facility on account of Penn State’s cutting-edge academic research and proximity to a number of Morgan’s key manufacturing sites.

Neil Sharkey, Vice President of Research for Penn State University, explained: “The collaboration is a win-win situation for all involved. Our commitment to developing new methodologies and making further scientific discoveries in carbon science is closely aligned with Morgan’s company vision, mission and commitment to the markets it serves. Morgan’s expertise and commercial insights will provide our researchers with a solid foundation to deliver commercially viable solutions that distinguish both Penn State and Morgan in a fiercely competitive marketplace, while contributing to job creation and economic development in the Pennsylvania Commonwealth.”

Mike Murray added: “Support from Penn State, the State of Pennsylvania’s governor’s action team and the Chamber of Business and Industry of Centre County has been vital in making this venture a reality. By working collaboratively, we envisage our discoveries will drive the industry forward, pushing the boundaries of technological innovation in the years to come.”